#QVSBOS- A Note on Simple Living

A NOTE ON SIMPLE LIVING

“The ability to simplify means to eliminate the unnecessary so that the necessary may speak.”
– Hans Hoffman

Recently a few housemates and I decided to go on a brief sugar cleanse. We decided on our general guidelines (no added sweeteners, but natural sugars are fine), a timeline (shooting for 3 weeks), and made a little group text for support. Although I didn’t even think I’d been eating much sugar before starting the cleanse, the first day was hard. The craving began immediately as I walked into the kitchen that morning, and my plain oatmeal didn’t do much to satisfy it. The rest of the morning was fine, but by mid afternoon I was tired and itching for the dark chocolate I knew I had at the bottom of my backpack. After dinner, my mouth watered at seeing the box of thin mints above the fridge. But I drank some vanilla tea and tried to push the sugar-coated thoughts out of my mind. Day two was easier. I drank more water and turned down a dessert offer without much regret. Day three was even better, and by day four I was coasting. My body felt more clean, alert, and stable. And on top of all that, everything began tasting better. Fruits especially started becoming treasures to my taste buds: a slightly ripe banana turned into the perfect dessert, and a couple strawberries in my yogurt powered me through the afternoon.

It was incredible to feel how quickly my body made these adjustments. I don’t know much about Science™, but I’ve heard this phenomenon described as “recalibrating your palate,” and that’s exactly how it felt. Remarkably, the sugar cleanse actually helped me revitalize my relationship to sugar, so that I could better discern when my body truly wanted it, and enjoy it more thoroughly when I did choose to consume it.

In a culture dominated by materialism, consumerism, and instant gratification, it can be difficult to take a step back from our cravings long enough to figure out what they really mean to us. We are encouraged to accumulate and acquire ad infinitum, to the point of losing our selves and our desires in the mess of excess around us.

The other day I was reminded of the old story about Michelangelo and the boulder. It’s been told many ways, but my version goes like this: One hot summer day in the Italian countryside, Michelangelo’s neighbor looked out her window to see Michelangelo pushing a massive, misshapen boulder up the hill towards his home. He was sweating profusely, and clearly struggling. The neighbor went over to help and both of them finally managed to get the rock into Michelangelo’s front yard. Before the neighbor had even caught her breath, Michelangelo pulled out his hammer and chisel and began to pound on the boulder. With genuine curiosity and slight concern, the neighbor asked, “Dude, what are you doing with this thing anyway?!” Michelangelo paused from his chiseling and turned to her with a smile: “There’s an angel inside and I’m trying to let it out!”

Although I’d heard this story before, it took on a whole new meaning in the context of my year with Quaker Voluntary Service.  When I began my fellowship with QVS, I committed to a year of simple, intentional living. I knew that simplicity was a core value in Quaker spirituality and practice, and I wanted to find ways to disengage with some of my own habits that have been fostered by our dominant culture. In the fall, I had some fear about what it would mean to live so simply. I knew I’d have to (at least somewhat) give up indulging in some of my favorite things: traveling, coffee dates, nights out dancing, kombucha, thrift shopping. And yes, I’ve certainly missed those things at times. But instead of the year being characterized by a feeling of scarcity or lack, I have actually felt overwhelmed by the greater abundance and clarity that simple(r) living has granted me access to. Just as the sugar cleanse recalibrated my palate and natural sense of taste, this year has helped me figure out which habits are actually most nourishing and life-giving to me. I have had to let go of certain desires and vices, but in their absence I’ve been able to devote more energy and resources to the things I actually love.

And, most wonderfully, my limited budget has allowed me to better appreciate the simpler (read: more affordable!) joys of my life that I would’ve otherwise taken for granted: biking along the Neponset River trail in the morning; laughing with my community as we eat a delicious home-cooked meal; spending an afternoon in the Boston Public Library looking for books I’ve always wanted to read. 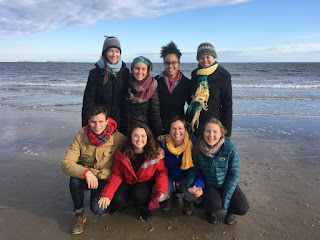 Within the Quaker community, I’ve heard simplicity described as “stripping away the superfluities,”  “clearing away the clutter” and “going directly to the heart of the matter.” Practicing simplicity can help us chisel away at the many layers of unnecessary possessions, emotions, and habits we’ve accumulated and held onto over the years. When we eliminate the excess, we can finally see what’s left: our true selves, beneath the stone, which have been waiting there all along.

For more from Kateri’s blog, here is the link: https://beetsnotbombs.blogspot.com/